On this blog, we have started several discussions around the misunderstandings between employees and their bosses. What matters most at work? Our surveys show that, in most cases, companies do not understand what their employees want from them—including the importance of competitive compensation as a benefit. At the same time, employees have a lot to learn in terms of what their bosses need and expect from them.

In our webinar on Wednesday, December 3—What Matters Most at Work—we’ll be taking a deeper dive into this topic. Ed Cone, Oxford Economics’ Technology Practice Lead, will be discussing these issues with SAP’s David Swanson and IBM’s Sheila McGovern. Be sure to tune in—you can register here.

Japan is in the news this week for its plans to invest heavily in robotics. The country currently uses approximately 300,000 robots, and plans to push that number up to one million by 2025.

The country hopes to address a growing national problem: a shrinking workforce population. (The country has other plans in the works, too, including one to boost women’s participation in the labor force.) Japan also hopes to reassert its dominance in robotics.

While Japan may see AI as part of the cure for its national labor force issues, employees may not be thrilled with this prospect. Our employee survey shows that 52% of workers in Japan say their position changing or becoming obsolete is a top job concern—that’s well ahead of the global total (40%).

Like most technologies, AI will significantly alter the nature of work across the world, and employees should be prepared to reevaluate how they fit in to the new workplace.

Our surveys show that men and women are aligned on many workplace issues, including leadership and learning. However, they do have slightly different priorities when it comes to job satisfaction and benefits. 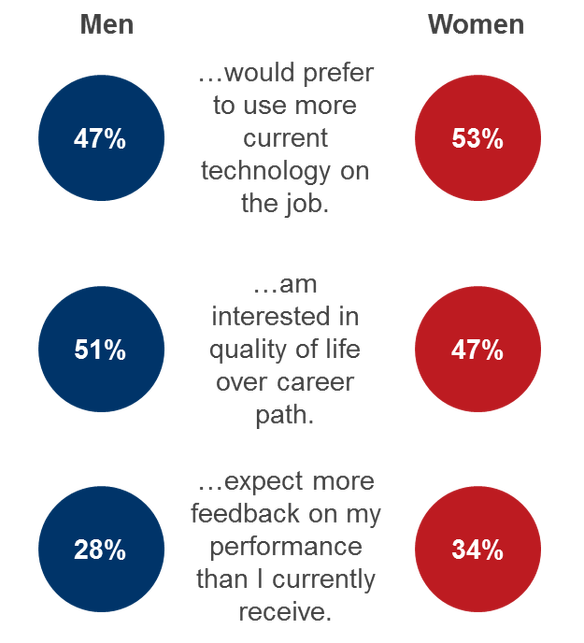 A few of the key differences our surveys revealed:

While it is important for companies to address the varying wants and needs of diverse groups, it is also important to recognize commonalities. Men and women, for example, are equally likely to say competitive compensation and flexible work locations are important. Companies will need to understand these differences and similarities as they work to set policies that attract the best workers from all demographic groups.

You can now listen to last week’s webinar on The Millennial Misunderstanding, featuring data presentation from Oxford Economics’ technology practice lead Ed Cone as well as real-world insights from Deloitte’s Deborah Cole and SAP’s David Swanson. During the presentation, panelists discussed some of the common misconceptions about Millennials in the workplace and what companies can do to better meet the needs of their younger workers.

Want to participate in one of our live webinars and have a chance to ask questions in real time? Be sure to register for our next one on What Matters Most at Work. We’ll be talking about the benefits and incentives that are most important to employees-and what most companies actually offer.

With our survey data, we broke out data for high performers—employees who were ranked highly in their last performance review—from average and low performers. Karie Willyerd, the co-author of The 2020 Workplace:How Innovative Companies Attract, Develop, and Keep Tomorrow’s Employees Today and a valuable partner in this research project, recently published an article on what these high performers want at work.

How prepared are companies to meet the needs of their best workers? How satisfied are these employees today? According to Karie:

You can read the full article at HBR—read it and join the discussion here.

Good news: If you didn’t catch our webinars on The New Face of Work, The Leadership Cliff, or The Millennial Mandate, you can still participate. Just check out the SuccessFactors events page for links to the on-demand presentations-as well as information about the webinars still to come.

Don’t forget: You can join us for a discussion on the Millennial misunderstanding–one the major themes of our research program-today at 10 am PT/1 pm ET.

During the webinar, Ed Cone will present the findings of our research and ask for insights from Deloitte’s Deborah Cole and SAP’s David Swanson. Do Millennials need to be managed differently than other workers? Do Millennials actually care less about competitive compensation? Are Millennials getting the training they need at work?